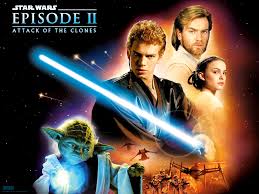 Before starting the star wars 2 review my oldest son, now 21, was young when the prequels started coming out; he was only 8 in 2002 when this movie was released. He enjoyed watching them, and I was pretty Blah about them. I haven’t seen the prequels in at least 6 years and just watched I & II.

I’m still pretty Blah about them.

ISSUES that I have:

#1)  Love professed:  We have Anakin that comes in as now a teen/young adult. In Episode 1 it seems like Padamae is at least 10 years older than Anakin (in real life Portman was 8 years older than Lloyd.)  Anakin now comes in to Episode II as a hired Jedi body guard.

He does not really hide his feelings for Padme’.  He quickly professes his love for her and that he dreams of her.  Now, I can see a boy having a crush on a woman and having that crush for years to come. (Marie Osmond, is the crush of my life). However, to watch this and Padme’ in turn profess her love for him just doesn’t seem “right” to me; seems like a line is being crossed that just shouldn’t be.  (Babysitter and child type strangeness.)

2) Eye levels… Jar Jar isn’t in this one much; thank goodness. However it seems like all of the CGI characters that we have humans conversing with have a completely different eye location than what the actors are looking at. So are they staring at a wart on a forehand or chin, or can the CGI creators not line things up?

3) Acting: Holy Cow! Little Anakin in Phantom Menace (Lloyd) was a weak actor. Did they have to get a young adult that acted as weakly as the kid did?   You have some top names and top performers in this film, then you have this guy, Hayden Christensen,  who just isn’t sure of what his character is suppose to be… Unless he’s suppose to be psychotic.

4) Loving a mass murderer? Yes, I’m coming back to them, what woman knows a guy likes her, find out he murdered and slaughtered an entire people, including women and children, and then she professes that she loves him? I’m thinking most women would would run screaming.

Finally, there are times that being a science teacher interferes with the enjoyment of a movie. Growing up with the Star Wars, Star Trek, Battle Star Galactica, Buck Rogers, etc movies was pretty cool. Watching the space fights was pretty amazing seeing and hearing the explosions. Then I grew up and started studying science. To learn that the best way to realistically watch a space explosion would be to mute your television…and only see it… My mind was blown. Now, every space movie I watch I can’t help but think how there’s no noise in space without air. [If you didn’t know that…ummmm… Sorry!]

Yoda Fights: My favorite part is getting to see Yoda fight. The way that little guy flips and spins and whips his light saber around is pretty awesome.

Clones they are: I like how the clones are used for good.  It’s nice to have a back story of their origin. I remember when I first saw the storm troopers as a kid I didn’t know if they were men or robots.

Love over everything else: I liked the story of Anakin’s mother.  I like how they handled her being left behind.  The concept that a man bought her, to free her and marry her is an endearing one.

Finding his way:  The fact that Anakin states a couple of times that he looks at Obi Wan as a father is endearing.  The fact that you see him fighting against Obi-Wan’s training, guidance, and instruction makes it a even more valid case.  It’s a normal young person coming of age that finds ways to rebel against their parents as they strive to stand on their own.  You can feel the growing pains of Anakin and he strives to be his own man… his own Jedi.

The whole movie and its premise is good versus evil. Hearing the guidance and sound advise of the good (Jedi) versus evil (Sith). I find it interesting how the Sith are constantly “tickling the ears” of the Jedi and trying to turn them to the Dark Side.

We are constantly warned against listening to those people that try to entice us away from God.

2Tim 4    3 For the time will come when they will not endure the sound doctrine; but, having itching ears, will heap to themselves teachers after their own lusts;  4 and will turn away their ears from the truth, and turn aside unto fables.  5 But be thou sober in all things, suffer hardship, do the work of an evangelist, fulfil thy ministry.

As I watched this again and I thought about a spiritual connection the idea of “The Force” made a connection with me. Obi Wan explains to Anakin that they are a species that reside inside of us, telling us what we should do. He tells Anakin that we are a Symbiotic relationship. (First, it should be a Mutualistic relationship; they both benefit.). He gives us guidance and allows us to comprehend God’s wishes when we read God’s Word.

Well, to be honest with you guys the movie was good Just good and due to the cool poster I will give it:

3  1/2 stars… a little warmer than colder. and some More Movies for you.